Geology and Soils of the Limestone Coast

Geological processes determine the way a landscape is expressed in terms of topography, rock types, soils, drainage, infiltration, runoff, re-charge and groundwater characteristics. Large and small scale geological processes impact on viticulture, consider slope and soil type as the result of these processes.

The Limestone Coast Wine Zone of Southeast South Australia hosts a landscape derived from the break-up of Gondwanaland, whereby the separation and movement of the Australian continent away from the Antarctic continent produced a seaway (the Southern Ocean). Basins associated with this new continental margin became subject to sedimentary infilling. It is upon these varied deposits that the Limestone Coast Wine Zone has developed. Central to this area is the Otway Basin, more specifically the westernmost portion, termed the Gambier Embayment. The timing of continental separation is generally agreed to have been initiated around 158 million years ago and is linked to global climate changes. Land contact is maintained with Antarctica until around 40 Million years ago even though rifting (splitting) was well developed. After this, the sea floor spreading rate increased and the southern seaway opened up. 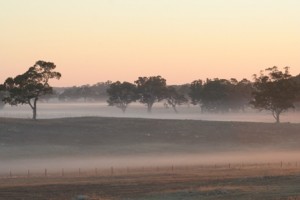 The Limestone Coast is unique in its geology and geography due to the variety of natural features that exist with the area known as the Otway basin. Each feature was formed over a long period of time to be what it is today, a rough timeline of these events are as follows.

The dunal systems of the Limestone Coast are probably one of the more visual features as you travel east to west across the region. These are the result of the ingress and subsequent retreat of the sea inland, leaving behind stranded dunal systems. There are 13+ recognised dunes and the following timeline describes the formation of these dunes through the region:

All of this geological activity has resulted in the range of soils that viticulturists have available to them in the Limestone Coast with 28 classes there are 20 that are significant to viticulture. The soils are broadly grouped into 5 groups, these being Shallow soils over calcrete, Textured contrast soils, Gradational loamy to clayey soils, Deep Sands and Wet soils. Each soil type has its own apparent challenges and benefits.